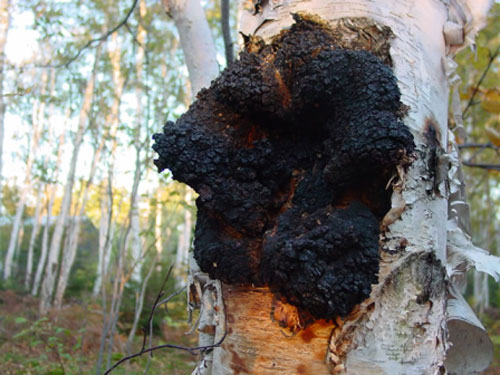 There are particular rules about how to gather, dry and store chaga.

It is generally believed that it is possible to harvest birch fungi all year round, regardless of the season. At first glance, this is indeed the case, due to the fact that chaga is a perennial slow-growing fungus, and because it is well protected from all sorts of external weather influences. But folk experience regarding chaga suggests that it is best to collect the fungus in spring and autumn since the greatest amount of nutrients accumulate during the spring sap flow and autumn preparations for harsh winter days.

There are other particularities in relation to gathering chaga. For example, you should not gather birch fungus from a dry tree due to the fact that, once a tree dies, the chaga thereon also begins to wither and die, giving way to another form of fungus – a fruit fungus. Also, you should never gather chaga from the ground, as it is here, where old, crumbling growths are typically found. It is easy to determine the unsuitability of such outgrowths for medicinal purposes, as they are looser, more crumbly and black across their thickness. There are also other subtleties that must be considered when gathering fungus.

Once chaga outgrowths have been separated from the trunk, they should be treated in a certain way. The reason for this is that not all parts of a birch fungus are equally useful as a medicament, and, while there are many nutrients in one part of the fungus, they are virtually absent in the others. How can these useful parts be determined? It turns out that the least useful parts are the light-coloured and loose parts of the fungus, located adjacent to the trunk. You should get rid of these parts, as well as all sorts of chips and pieces of birch bark, directly there in the forest.

You only need to leave the solid parts of the fungus – the outer and middle parts. It is best to immediately cut up the gathered raw material into small pieces, right next to the tree.

Then the fresh chaga should be dried, but even here, there are also some subtleties. The fact is that fresh chaga mushroom is easily exposed to mould; thus, is should not be dried in an area that is too damp, cold or poorly ventilated. In any case, you should not attempt to dry chaga more quickly in a hot oven either; otherwise, it will lose most of its biologically active nutrients. Therefore, it is necessary to find a middle ground – you must choose a dry, warm, well-ventilated place. As well, it is necessary to cut the fresh chaga into pieces that are no more 3-6 cm and dry it until the pieces become hard and crumbly. Well-dried birch chaga should be put into glass jars with tight-fitting lids, and can also be packed in sealed paper or linen bags. Chaga that has been properly harvested, prepared and stored retains all its medicinal properties for a period of two years.