Recent studies have shown that Chaga has extremely high antioxidant compounds. Hundreds of research studies overwhelming confirm the health benefits of antioxidants. These antioxidants protect the body against "free radicals", which cause chemical reactions (oxidation) that destroy cells and damage tissues. Free radicals cannot be avoided: ultraviolet light, for example, is a common source.

The USDA has recommended that people should increase their antioxidant consumption to have a significant impact on plasma and tissue antioxidant capacity.

ORAC stands for "Oxygen Radical Absorbance Capacity", a USDA recommended standard for measuring antioxidant capacity. The measurement of ORAC analyzes how a certain food helps your body fight free-radical damage. The higher the ORAC score, the more the food will help you.

This is a scale that measures the amount of free oxygen radicals in your body that a food or supplement can absorb. Free oxygen radicals are formed in our body from normal daily living, electricity, pollution, sun exposure and various other unavoidables. These free radicals bounce around our body beating up on our cell structure and organs. Cigarette smoke is full of free radicals. Ever notice how smokers look so much older?

Researchers have also discovered that consumption of foods with a high ORAC score help protect against premature aging and age-related memory loss. Chaga has one of the highest reported ORAC scores in natural foods and vegetables. Chaga also has Polysaccharides, that other mushrooms contain, and Triterpenes only found elsewhere in Ganoderma.

As you can observe from the graph and table below, Wildcrafted Chaga demonstrates superior antioxidant values compared to superior class mushrooms and other popular antioxidant juices available.

ORAC is the acronym for Oxygen Radical Absorbance Capacity. Hydrophilic ORAC tests measure the water-soluble antioxidant capacity of the sample. As you can observe from the graph and table below, Wildcrafted Siberian Chaga demonstrates superior antioxidant values compared to superior class medicinal mushrooms and other popular anti-oxidant juices available. 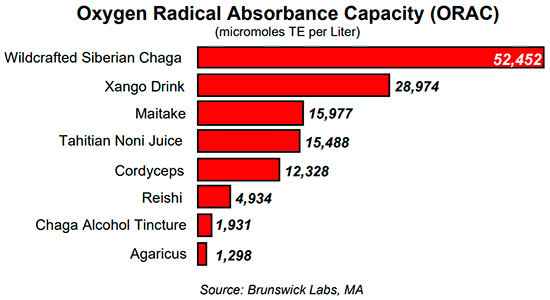 Certain enzymes have been found to be powerful antioxidants. Superoxide dismutase (SOD) is an enzyme which converts the superoxide ion to less toxic hydrogen peroxide and is produced by a healthy human body with normal metabolic and immune system balance. Superoxide ions are acquired from chemical elements in foods and the environment, including fertilizers, pesticides, preservatives, and pollutants.
Quantification of the levels of antioxidant activity of SOD enzymes showed that Chaga had values that are extraordinarily high in comparison to other medicinal mushrooms and popular juices having high antioxidant content. 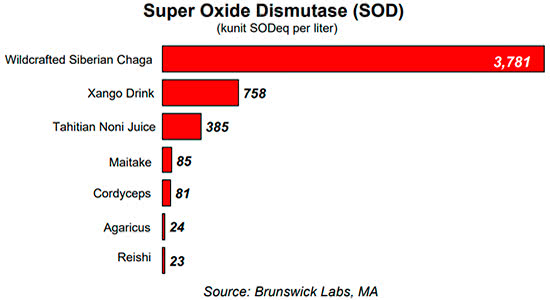