Considered part of the "Fifth Kingdom," Chaga (Inonotus Obliquus) and similar species of Fungi are NEITHER plant nor animal, yet its DNA chromosomal makeup is 30% closer to humans than plants.

Siberian Chaga has been embraced and revered over centuries for its health-enhancing properties. As a result, Siberian Chaga is the most highly prized of all mushrooms, commanding as much as 12 times the value of other mushrooms.

Classified scientifically as: Basidiomycetes mushrooms, to which there are approximately 200 species, have demonstrated health enhancing values. Chaga contains more anti-oxidants and phytonutrient compounds than other Basidiomycetes.

Chaga tends to be grouped with another fungi and mushroom species such as Ganorderma Lucidum, commonly known as: Reishi in Japan and Lingzhi in China. Due to their properties, however, this generality and/or grouping is incorrect for they are different sub-species and do not contain the phytonutrients, betulinic acid, the same types of beta glucans and SOD found in Siberian Chaga (Inonotus Obliquus).
Chaga is rich in minerals such as: Vitamin B1, B2 and B3 as well as Amino Acids. It contains Ergosterol (a precursor of Vitamin D2), has low Caloric Value and and is high in Dietary Fibers. It also contains high levels of melanin, a potent protector of DNA integrity.

Chaga contains a complex "cocktail" of phytonutrients and immune activating compounds such as Beta Glucans (Complex Carbohydrates) or Polysaccharides found in Algae, Yeast, Oats, etc. Beta Glucans are largely responsible for supporting a healthy immune system and restoring balance in the body.

The only commonality is that all of them are part of the family of over 200 BASIDIOMYCETES MUSHROOMS of which Siberian Chaga is at the top of the chain as the most desirable, rare and powerful in its health supprting capacity.

Unlike most mushrooms, Chaga is a polypore, a fungus with pores instead of gills. It has the outward appearance of a black, irregular, cracked mass, grows on tree trunks and is most often sterile.

Chaga has an advantage no other fungus or mushroom has - that it contains "betulinic acid". Betulinic acid and its derivatives have been demonstrated, in laboratory and biochemical research, to have strong health enhancing properties with virtually no side effects nor toxicity. Betulinic acid is being studied throughout the world by the scientific community for its promising applications.
Chaga also contains many of the immune-stimulating phytochemicals found in other superior mushrooms such as the maitake and shiitake mushrooms in a form that can be ingested orally.

All superior mushrooms, and in particular Chaga, contain vast amounts of triterpenoids and Sterols. Lingzhi and Reishi has 100 types including Ganoderenic Acid "A" and Ergosterols and Ergosterol Peroxides. By Comparison, Siberian Chaga has a similar profile to Lingzhi and Reishi but has far greater values of betulinic acid and high amounts of Lanosterol - linked triterpenes.

An abundance of Lingzhi or Reishi mushrooms are available to the public, but sadly too many firms supply the active primary ingredients in capsule form, which are diluted in the process of being encapsulated for easy consumption. This may not be optimum for absorption. In addition, many of these mushrooms are farmed resulting in less potency and effectiveness.

Of 140,000 types of mushrooms and fungi 38,000 are mushrooms species, of which only 200 have demonstrated some value. Of these 200 species, approximately 50 have shown researchers truly "superior and edible higher basidiomycetes". The top 10 superior mushrooms out of 50 are:

These 10 mushrooms account for approximately 83% of all the research studies performed to date. Their combined value is a life enhancing smorgasbord. 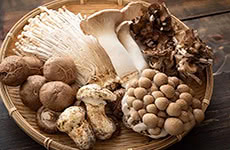 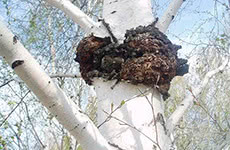 Chaga (Inonotus Obliquus) contains a many times more antioxidants and phytonutrient compounds than any other fungi or mushroom.