A chaga infusion can be prepared at home in several ways:

Basic Recipe For a Chaga Infusion 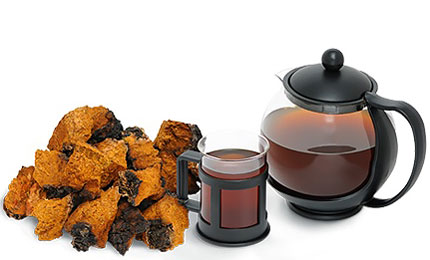 This method of preparing an infusion from birch chaga is optimal, and preserves the greatest number of useful compounds and medicinal properties. It is recommended as the primary way for preparing infusions for treating various diseases:

Take a piece of chaga and wash it. Then pour some room-temperature water, which has been either boiled or purified, and leave it in the water for 6-7 hours until it is completely softened. You should not use metal or wooden dishes; glass or ceramic dishes are most suited for this purpose.

Soaked fungus should be squeezed and dried out, while the water should be left, rather than poured out. After that, you need to chop up the chaga, which can be done by grinding it up with a grater or a mince. Then it is necessary to heat the water, in which the chaga is soaking, to 40-50°C, and pour it on the fungus in the proportion 1 part chaga to 5 parts water. It is important not to overheat the water; otherwise the fungus can lose its beneficial qualities. Afterwards, the fungus should infuse for two days. It is better not to do this at room temperature, but instead put the tincture in a cool place so that the fungus does not inadvertently ferment.

The prepared infusion should be carefully drained and stored under cover in a cool dark place. The infusion is suitable for consumption for the next four days.

There are no contraindications for the use of this infusion.

When using this method, the number of useful nutrients in this beverage is somewhat less than the infusion achieved using the basic recipe. This is because a higher temperature is applied and the time for the infusion is reduced to only a few hours. Nevertheless, this infusion also has a high curative effect. 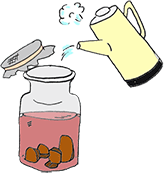 If you are unable or unwilling to devote much time to preparing an infusion, you can also brew chaga in the same way that you brew tea. This option can be used, for example, under field conditions or in the case that you want to drink tea in the forest, made of freshly collected chaga. This beverage is inferior to the first two infusions in terms of its therapeutic properties.